This is quite amazing and pushes the limits of birch : supposedly it was impossible but here it is :

: heres the entry from wikipedia:

The structure consists of six parasols in the form of giant mushrooms (“Las setas” in Spanish), whose design is inspired by the vaults of the Cathedral of Seville and the ficus trees in the nearby Plaza de Cristo de Burgos. Metropol Parasol is organized in four levels. The underground level (Level 0) houses the Antiquarium, where Roman and Moorish remains discovered on site are displayed in a museum.[3] Level 1 (street level) is the Central Market. The roof of Level 1 is the surface of the open-air public plaza, shaded by the wooden parasols above and designed for public events. Levels 2 and 3 are the two stages of the panoramic terraces (including a restaurant), offering one of the best views of the city centre.[4]

Since the 19th century, a market was located in the plaza, housed in a market building. The building was partially torn down in 1948 according to plans for urban renewal. The market itself remained however, until 1973, when the rest of the dilapidated building was finally torn down. The land remained dormant until 1990, when the city decided to construct underground parking with space for a market on top. However, in the midst of construction, ruins dating to Roman and Andalusian eras were discovered, and construction was frozen after an expenditure of 14 million euros. In 2004 the city decided to attempt to develop the area again, and opened an international competition to solicit bids. 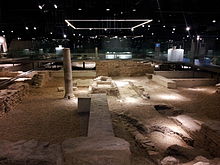 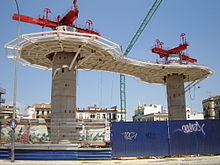 Construction began on June 26, 2005, with an estimated cost of 50 million euros and a projected completion date in June 2007. However, unknown to the public, the project soon faced difficulties. By May 2007 engineering firm Arup informed the municipal authorities that the structure was technically infeasible as designed, given that a number of structural assumptions had not been tested and appeared to violate the limitations of known materials. The wood they used was birch tree they imported from Finland because of its straight qualities.[5] Much time was spent developing a feasible alternative plans to buttress the structure, which themselves proved impractical because of the added weight.[5] A feasible design using glue as reinforcement was finally settled on only at the beginning of 2009.[5] By some estimates, due to delays, the total cost of the structure approached 100 million euros.[6]

Im a bike builder specialising in bespoke and cutting edge ideas about wood and materials and combinations of them to arrive at the best composite materials for bikes, especially wooden ones View more posts